While most urban constructions sit upon a rock, Matera is a city that seems like an organic growth of the rock. Urban dwellings are carved into the ravine and protrude from the cliff face creating a jumbling, patchwork mass. It is difficult to discern where rock finishes and man-made construction begins. In this lattice of construction, the roof of one structure forms the foundation for another. A honeycomb of caves can be seen both within the city and across a deep gorge on another cliff face where dark gaps blot the green in a crooked line. These are thought to be some of the most ancient inhabited dwellings in the world, dating from paleolithic times. 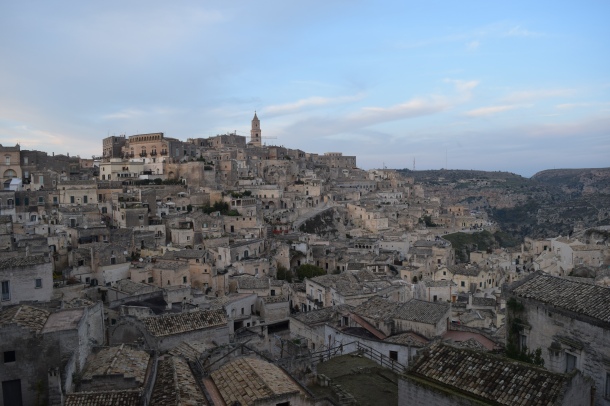 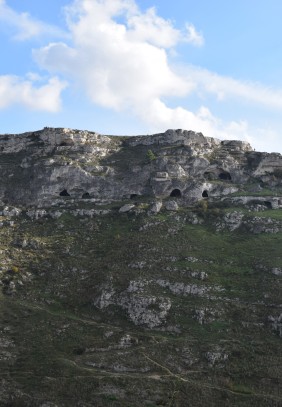 It is not surprising that this harsh, craggy assemblage of honey-coloured stone structures has been employed by several film directors as settings for religious dramas. Later filmed in Matera, in Christ Stopped at Eboli Carlo Levi wrote about the poverty and squalor of Southern Italy, an area where residents felt they had been “bypassed by Christianity, by morality, by history itself”. Francesco Rosi was enchanted by Matera’s abandoned caves and used them in his film adaptation of Levi’s book. In 2004 Matera became Jerusalem for Mel Gibson’s The Passion of Christ, where the dusty, barren landscape and crumbling, rough-hewn stone houses evoke the suffering of Christ. 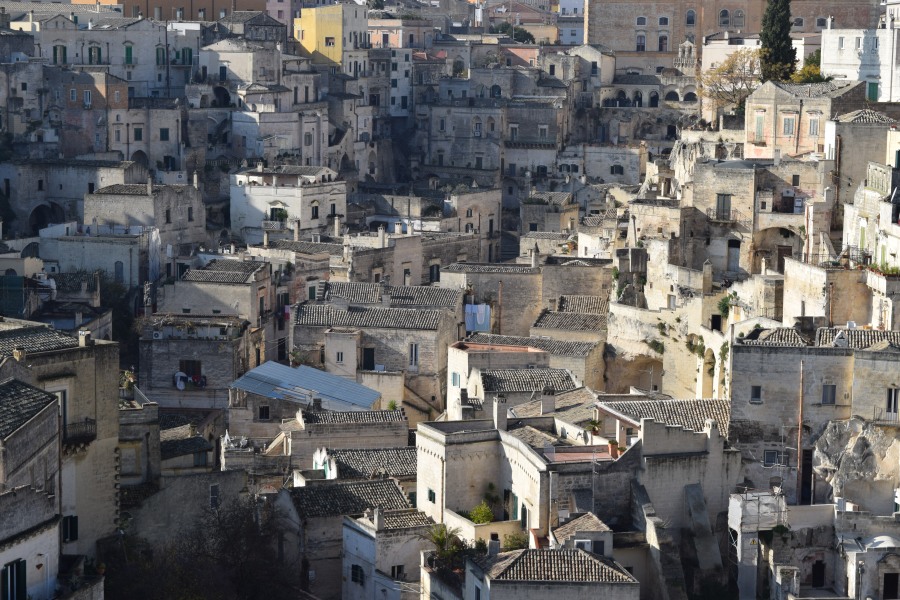 I Sassi: From National Shame to a World Heritage Site

The prehistoric cave dwellings, called sassi, were still in use as houses until the mid 1950s. Far from being romantic ancient homes, these sassi were considerably below inhabitable standards. Those located across the gorge were, and remain, accessible only by a steep perilous track up the ravine. With poor sanitation, animals living beside humans, and a high infant mortality rate, the sassi were considered a national disgrace in the post-war period.Carlo Levi describes his impressions:

“The doors were open because of the heat, I looked through: and I saw the inside of the grottos which do not receive light or air except from the door. Some do not even have that: you enter from above, through trapdoors and ladders… Inside these blacks holes with earthen walls I saw the beds, the miserable furnishings, the hanging rags. Dogs, sheep, goats, and pigs were lying on the floor. Each family usually has one of those caves for habitation and they all sleep together, men, women, children, and animals. There was an infinite number of children, naked or in rags. I saw children sitting in the doorway of the houses, in the dirt, in the scorching sun, with half-closed eyes and red and swollen eyelids… young faces wrinkled like the elderly and skeletal with hunger, their hair full of lice and scabs. Thin women with malnourished and dirty infants and clinging to their withered breasts, I seemed to be in the middle of a city hit by the plague. ” (Carlo Levi, Christ Stopped at Eboli, 1945) 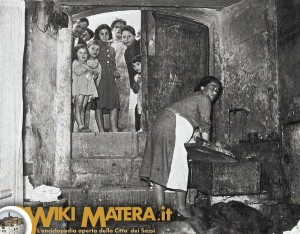 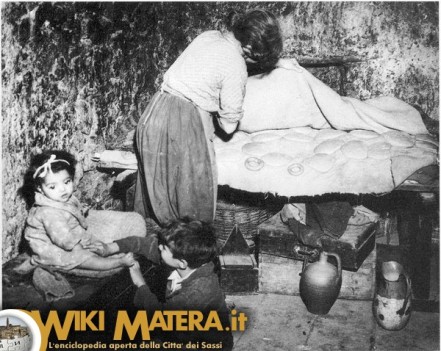 With the government determined to find a quick solution to this shameful situation, residents were relocated to modern homes in outlying districts and for many years the caves were abandoned and forgotten, out of sight and out of mind. But with the steady trickle of enraptured film directors came a new appreciation of this surreal urban landscape. By 1993, the sassi had been recognised and designated as a World Heritage Site, and in 2008 Matera won the title of European Capital of Culture 2019. See the emotional video here of the moment the winning city was announced. Since the late 80s, therefore, sassi within the urban area began to undergo a transformation into livable, or at least usable, structures. As such, there are even a few people who can claim they live in the same house as ancestors of 9,000 years ago.

Furthermore, the sassi comprise not just houses, but also churches, monasteries and hermitages. The rocky plateau, as described in the UNESCO listing, “integrated with ancient cave churches, shepherd tracks marked by wells, and fortified farmhouses, form[s] one of the most evocative landscapes of the Mediterranean.” Now open to the public to visit are many of the Rupestrian churches, which combine stark rock with fresco work and interior decoration. Santa Maria de Idris is the most dramatic church, perched at the top of the Sasso Caveoso area and excavated from a misshapen mound of rock. From certain sides it is only identifiable as a church, even as a building, by the metal crucifix adorning a jagged peak of rock. Inside the uneven walls are enlivened with frescoes of saints, many unfortunately severely damaged by damp. These date from as far back as the 11th century, and there are traces all around the church of even older frescoes and decorations in stone. 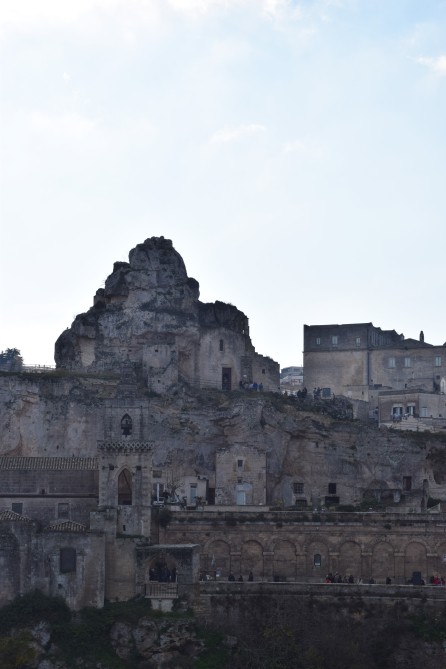 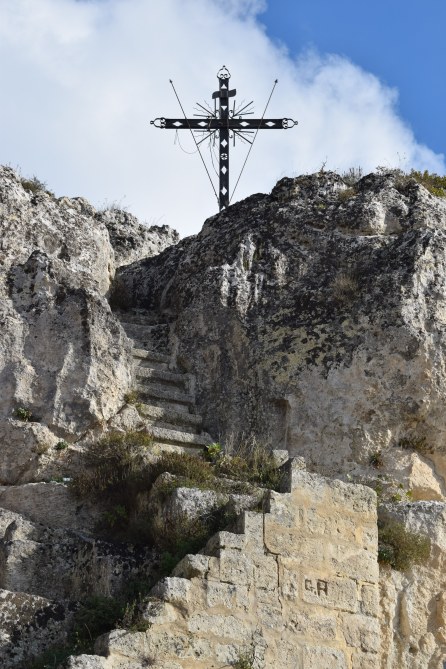 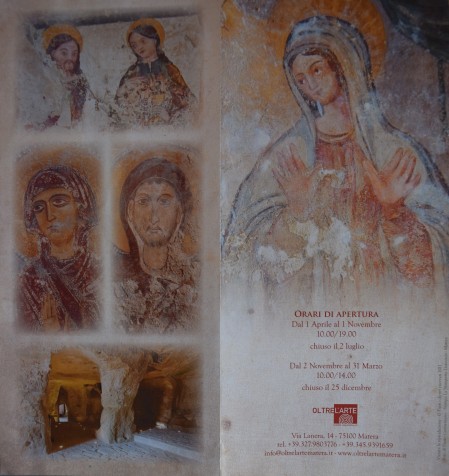 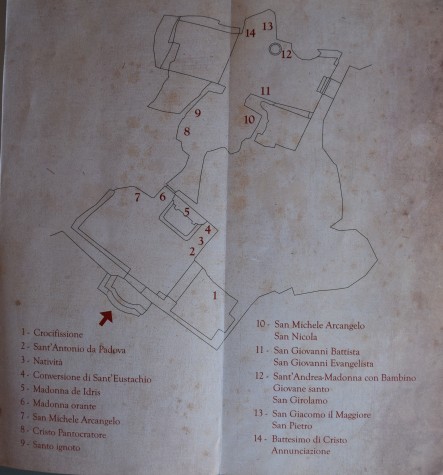 The church of Santa Lucia alle Malve, dating from 9th century A.D., has a more architectonic interior, with crooked arches carved out of the rugged walls, defining a nave and aisles, and traces of columns. The subterranean experience is heightened by the thick green slime coating the walls. The church is filled with frescoes, some housed in crudely excavated niches, dating from 11th to 17th centuries. Traces show that there was likely a much larger decorative scheme. 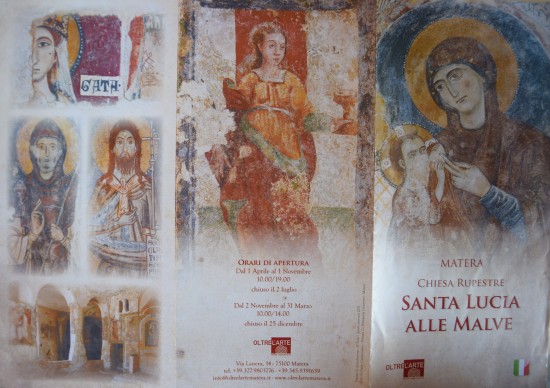 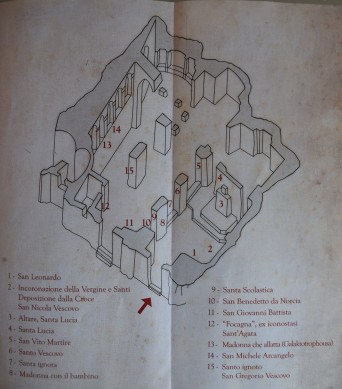 With the influx of tourism, the abandoned sassi are being breathed into life again. One of the most notorious re-imaginings of the cave dwellings has, rather ironically, been a luxury hotel. It is part of the Sextantio group, which owns a few alberghi diffusi, meaning hotels which are composed of several separate buildings within a town context, or even a hotel made from an entire hilltop village. The hotel in Matera, Le Grotte della Civita, is spread across several rocky terraces of caves. From the website, and from peaking inside, the caves are bare and unadorned, and minimally furnished with recycled objects. Certainly it is a relief to finally find an economically orientated organisation that prefers history and heritage to mini-bars and jacuzzi. But it all seems a bit superficial when you see the prices. The hotel is charging as much as 500 euros a night for a room which uses a ladder as a towel rail. It seems the ‘true to the past’ attitude is just a facade for a clever money spinning ploy designed to deceive the rich and stupid using Matera’s fairytale image. Indeed on seeing the ‘luxury’ accommodation in the bare light of day and not evocatively candle-lit as on the website, the word that came to mind was furbo, meaning sneaky or sly. 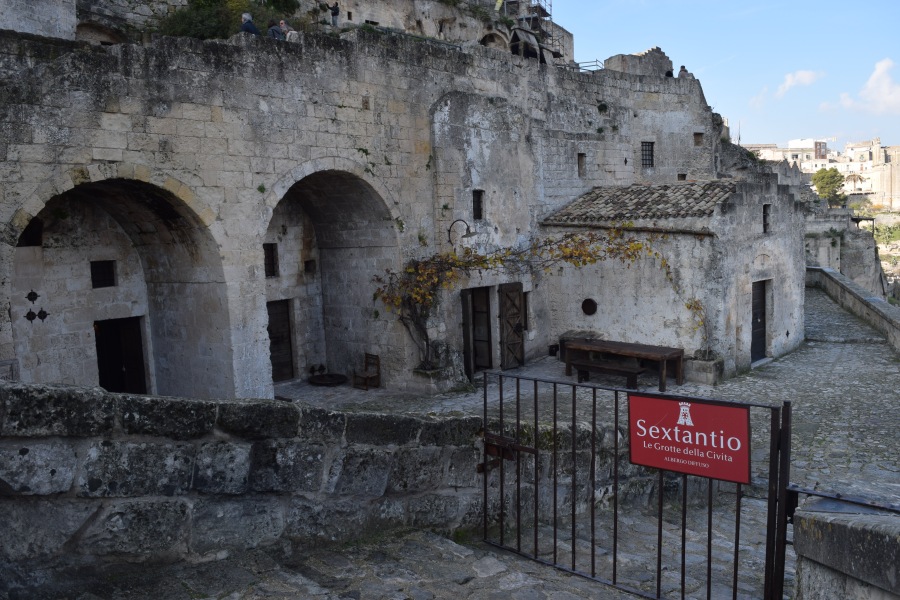 While Matera enchants through its forlornity and fairytale historical integrity, this character will be very difficult to maintain. Currently empty, and therefore untouched, the remaining sassi will likely soon host fashionable bars and restaurants, which cannot function without adapting these ancient dwellings to modern needs. One can only hope the UNESCO heritage legislation is watertight.

Linked up with #TravelTuesday! 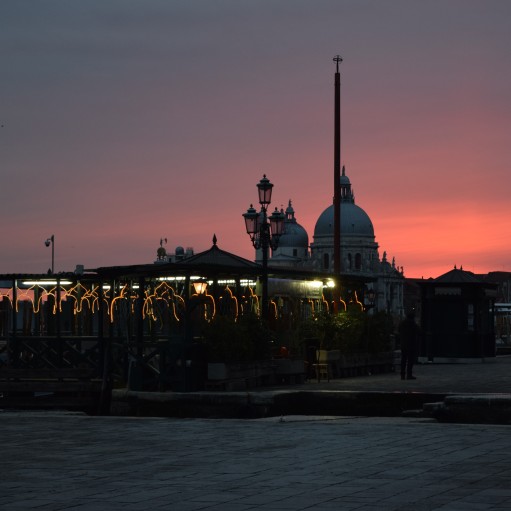 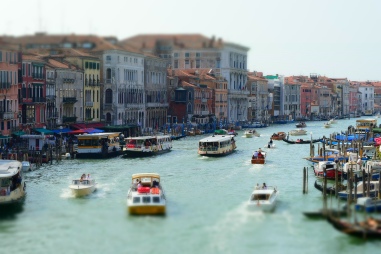 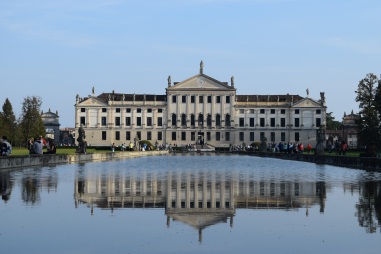